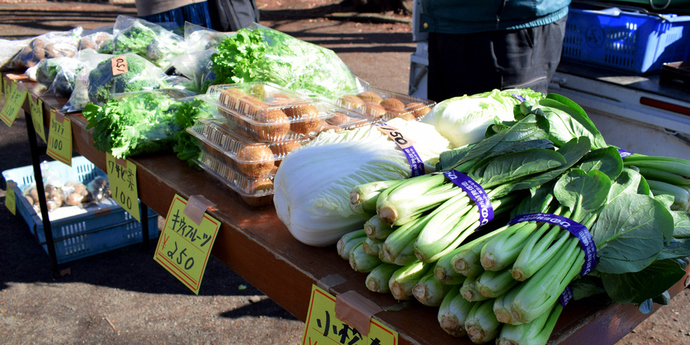 In the last Hino Note, we took a peek into Hino’s farming scene. This time, we’ll introduce some places where you can buy produce directly from farmers. As a special treat, we also have two recipes by local women in farming!

In Hino, mini farmers markets are held three times a week at two locations. One can be found in the public square on the east side of Hino Station, while the other is in Tamadaira Dai-nana Park near Toyoda Station; both are open on Tuesday, Thursday, and Saturday afternoons. The number of farmers present depends on their schedules and harvests, but you can usually count on there being two or three per market, each with an array of freshly picked fruits and vegetables.

While many of us shop at grocery stores for convenience, there are a lot of advantages to buying directly from farmers. For one, the produce you get will be much fresher. Farmers often bring produce picked that very morning! Buying directly from farmers also costs significantly less than buying from grocery stores and goes straight to supporting the local farming community.

It’s also a fun opportunity to meet local farmers! I tried asking a few farmers and their customers about their favorite ways to cook local produce. Here’s a summary of some good cooking tips I heard:

These are all great tips! Did you know that you can also find free recipes by local farmers on the Hino City website? The Michikusa Association of Women Farmers in Hino has shared over 40 of their favorite recipes. For this Hino Note, I translated two of them to English. Give them a try!

Michikusa’s quiche recipe is packed with nutrients, and is easy to personalize by substituting fillings and spices. Depending on how thick or thin you cut the slices, it could be a healthy meal for the family or a fun appetizer for potlucks and parties.

Michikusa’s mashed potato recipe is a cross between classic Western mashed potatoes and Japanese kinton desserts. Instead of using the typical russet or Yukon potatoes, this recipe uses sweet potatoes along with apple bits, butter, and a hearty dose of sugar to make a sweet treat great for both adults and kids.