This month, Mayor Otsubo and a delegation from Hino City paid a visit to a very special old friend – our American sister city, Redlands! The City of Redlands, located in sunny Southern California, has shared a sister city relationship with Hino since 1963. In those 55 years, we’ve enjoyed all kinds of interaction, including a long-running annual homestay exchange program for high school students. As sisters, Redlands has a lot in common with Hino, despite being an ocean apart. Here’s a little sampling of what it’s like!

With the Olympic Games coming to Tokyo in 2020 and Los Angeles in 2028, both Hino and Redlands are looking to further expand upon sister city bonds as part of their preparatory efforts. Just this spring, the Redlands Sister Cities Association commissioned the placement of three murals showcasing Hino and Redlands’ two other sister cities along a public walking trail. Now, the murals’ colorful depictions of architecture and public monuments raise local interest in cultures from around the world. Similarly, Hino is in the process of developing avenues of athletic exchange to promote international awareness through sport. 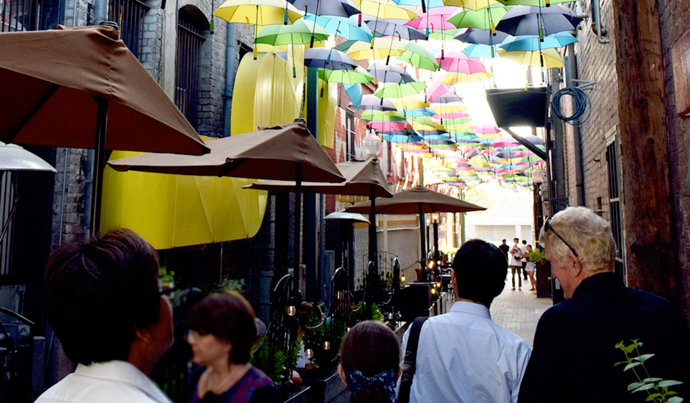 Like Hino, Redlands is also working on transforming everyday aspects of the city into scenic destinations, such as this former alley. Believe it or not, this umbrella-shaded sidestreet lined with pedestrians and restaurant patios used to be a dark alley with little to see besides dumpsters. With a little makeover, the street is now a popular shortcut through Redlands’ growing downtown shopping arcade. It’s also part of an umbrella plan (no pun intended) to increase bicycle and foot traffic in Redlands, which helps keep both the locals and the ecosystem in shape, a sentiment Hino locals can definitely get behind if the abundance of walking trails here is any indication!

Another trait our cities have in common is a passion for local history. You can see in the photo here a pair of life size statues of the Smiley twins, two philanthropists who were responsible for the construction of several public facilities, including the lovely historic library behind them. This public library is but one of several examples of historic architecture within Redlands, which in its heyday as the world’s naval orange capital was home to several lavish mansions and gardens. The library also keeps record of the city’s past in its archives. Just like Hino, Redlands also loves to make history accessible and engaging to all, as you can see from the twins’ festive Fourth of July getup for America’s Independence Day.

Rather fitting for a city with significant public interest in American history, Redlands has one of the biggest Fourth of July celebrations in all of California! During the day, they have a bustling fair complete with live music and a parade. At night, firework displays illuminate the summer sky.

Redlands is just a short drive from Los Angeles, Palm Springs, and other Californian tourist destinations, making it a perfect spot for a lazy day away from the crowds, especially if you can make it for the biweekly music festival held throughout the summer months! Between their friendly fun-loving community and the dedicated preservation of historic treasures, I’m sure our sister city Redlands will feel just like a home away from home for Hino locals. If you’re ever in California, be sure to stop by!