An Evening of Shomyo and Jazz

As someone interested in music, I’ve seen my fair share of eclectic rock bands and wacky musicals, but I never in my wildest dreams could have imagined I’d one day watch a disco ball shoot lasers of light over the heads of Buddhist priests as they chanted prayers in time with a jazzy instrumental track. Now, that’s a lot to unpack all in one sentence. Let me start from the beginning: 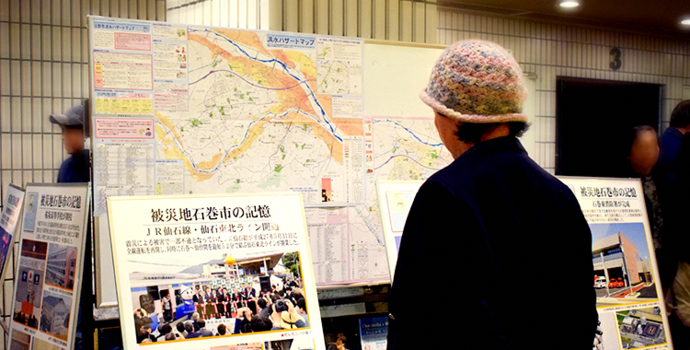 The Hino Shimin Kaikan, a local community center with performance and event spaces, makes it their personal enterprise to promote interest and participation in cultural activities. Their latest project was a charity concert held on March 23rd to remember those lost during the Tohoku Earthquake in March of 2011. At the concert, guests were able to learn about the earthquake and areas it impacted before one of the most unique musical experiences I’ve ever had – An Evening of Shomyo and Jazz.

As the name would suggest, the concert’s setlist was designed as an unprecedented fusion of jazz and shomyo. While I’m sure many of you are familiar with jazz, you might be wondering what exactly “shomyo” is. Put simply, it’s a form of musical Buddhist prayer chanting which has existed for over a thousand years, and it can be considered one of the many influences on the evolution of Japanese music.

Though shomyo and jazz are an unusual pair, they were a perfect fit for the charity concert’s themes: remembrance, peace, and looking forward. The deep-set tradition and spiritual nature of shomyo blended startlingly well with the infectious here-and-now spontaneity that is so much of jazz’s charm. Finding balance between such radically different genres would never have been possible without a lot of practice, though! Last year, several months before the concert, jazz quintet Super Red Band visited Takahata Fudo-son to get a feel for shomyo. While listening, members of the band rearranged jazz riffs in a digital audio workstation, beginning to tailor an instrumental to the vocals right then and there.

The music itself wasn’t the only thing that took some coordination! Praying for the regions affected by the 2011 Tohoku earthquake was an important aspect of the performance, so keeping the shomyo authentic and respectful to Buddhist practice was a must. The challenge? A concert stage is an entirely different setting from the typical temple!

The participating Chisan priests from Takahata Fudo-son and around Tokyo’s Tama region brainstormed at dress rehearsals to find creative ways to adapt. For example, if you’ve ever performed in a large hall, you’ll know how surprisingly difficult it can be to hear each other on stage! That said, being able to hear the full harmony clearly is vital to voicing shomyo’s complex changes in pitch. As a solution, the priests and Super Red Band positioned speakers on-stage in a way that the priests could hear themselves.

With all that practice and preparation, the group was more than ready for the big day! The concert opened with the priests and jazz band performing their own individual pieces separately, giving guests as taste of both musical styles on their own. The program included arrangements of popular Japanese songs like “Sakura Sakura” and “Haru yo, Koi” along with some of Super Red Band’s original compositions.

However, the real magic happened in the second half of the show when everyone came together for a touching rendition of “Flowers Will Grow,” the 2011 Tohoku Earthquake’s recovery song.

At first, the Super Red Band quintet stood alone on the stage after just finishing a jazz medley. During the introduction to “Flowers Will Grow,” guests were invited to take out the lyrics sheet included with the evening’s program as guest performers and a vocalist made their way onstage. The audience was initially silent, though, wordlessly captivated by the vocalist’s sensitive take on the song’s bittersweet yet hope-filled message. Then, the priests surprised everyone as they filed through the seating area in two dignified processions, joining the jazz band on stage! I could see people in front of me wiping away tears at the sight to begin softly singing along.

The last note was met with a stunned moment of complete silence, then a thunder of applause to kick off the combined band’s last few songs. From start to finish, the Evening of Shomyo and Jazz truly was an unforgettable experience, and I really hope it becomes the spark for other eclectic music styles in the future!