The Evolution of the Hina Doll

The following article is about the 2018 Celebration of Hina Dolls. For up-to-date information, check the exhibit's dedicated event page (linked below).

As you may remember from earlier Hino Notes, the Hino-shuku Honjin once functioned as an inn for dignified travellers. Though the Edo-era building has since been repurposed as a museum, its old-fashioned Japanese-style rooms have all been lavishly decorated for some very special “guests” in preparation for an upcoming festival.

These seasonal visitors are none other than intricate empress dolls, accompanied by their little court ladies and musicians! 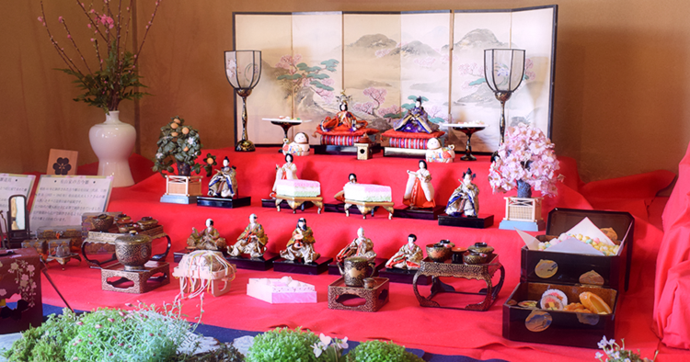 These miniature dignitaries are called Hina dolls, and they’re a traditional decoration for Hina-matsuri. Also called the Doll Festival or Girls Day, Hina-matsuri is an event held each year on March 3rd. Japanese families with young daughters put up layered displays of dolls to wish for the girls’ good health and happy future, with the scene’s highest layer reserved for the empress and emperor.

Did you know that you can roughly guesstimate whether a display is old-fashioned or modern by checking which side the empress is sitting on? If she’s on your left like in this display, it’s arranged the traditional way. An empress on your right is indicative of a more modern style!

The Japanese custom of arranging Hina dolls traces its roots back to the Heian period, when people performed a cleansing ritual using dolls called nagashi-bina. These dolls were fairly simple, loosely mimicking the shape of humans. People would place their nagashi-bina in a moving body of water, such as a river or the sea. It was believed that any bad fortune surrounding the person would stick to the doll and thus be carried away by the current.

This display in the Hino-shuku Honjin represents those roots with a number of nagashi-bina “floating” on a stream made of puffed rice.

Over time, nagashi-bina evolved into protective dolls kept at children’s bedsides, which in turn grew more and more detailed as wealthy families started giving their daughters dolls to play with. Eventually, the elaborately sculpted, painted, and richly dressed dolls like the court lady in this photograph came to be. Hundreds of years after the nagashi-bina ritual’s heyday, the practice of placing dolls on layered shelves began in Edo period.

As you make your way through the rooms of the Honjin, you can see dolls representing various periods of Japan’s history after the advent of layered Hina doll sets. The oldest dolls trace all the way back to the Meiji period!

Not everyone could afford such extravagant dolls though! It wasn’t until the Edo period that Hina dolls started to spread to the common folk and the festival as we know it began. One of the ways the average family could celebrate a young girl without breaking the bank was with mobile-like doll sets called tsurushi-bina. Mothers, grandmothers, aunts, and sometimes friends of the family would hand-make dolls, presenting little girls with the resulting collection.

Each of the colorful shapes has its own meaning rooted in Japanese culture and linguistic wordplay. For example, turtles and cranes stand for longevity, dogs ward off misfortune, and the two connected halves of clam shells represent faithful love. Of course, these are but a few of many, many symbols!

As Hina dolls became accessible to more and more people, they also started to take on a wider variety of appearances. Nowadays, dolls have come to take on all sorts of shapes and sizes! Take this set of bunnies dressed in Heian court robes. Not only are rabbits cute as can be, they also symbolize a wish for girls to have a big, happy family when they grow up.

All in all, with Hina dolls old and new, dignified and whimsical, the Hina exhibit at the Hino-shuku Honjin was an amazing walk through the history of an age-old tradition. Not to mention that it’s not easy to find tsurushi-bina nowadays, even here in Japan! If you’re around, definitely check out the exhibit before it closes on March 4th!

Wanna learn more about the Hino-shuku Honjin and its history? Check out the Hino Note on it for more photos and fun facts!