You may be familiar with Setsubun, a Japanese festival held around the country to drive away misfortune, but there’s a lot more to it than you learn in language textbooks! In a nutshell, the day usually involves throwing roasted soybeans to repel demons, and then eating said beans to bring good health and fortune for the year. People typically celebrate Setsubun on February 3rd, but the fun starts a few days early in Hino!

On January 31st, a huge crowd of families and school children gathered to watch the mameiri-shiki, or bean-roasting ceremony. As part of the ceremony, priests from Takahata Fudo-son poured countless beans into a giant roasting pot to prepare for the upcoming festivities.

With the soybeans in place, people took turns stirring the pot with large wooden paddles. This kind of community event isn’t the norm in Japan though – bean-roasting usually happens behind the scenes, with people only gathering for Setsubun itself.

Takahata Fudo-son and the people of Hino have a deep interest in keeping the tradition alive, however. Anyone is welcome to participate, regardless of language level. All you have to do is make your way to the pot, and wait for your turn. Give the pot a quick stir, then pass the paddle to the next person. 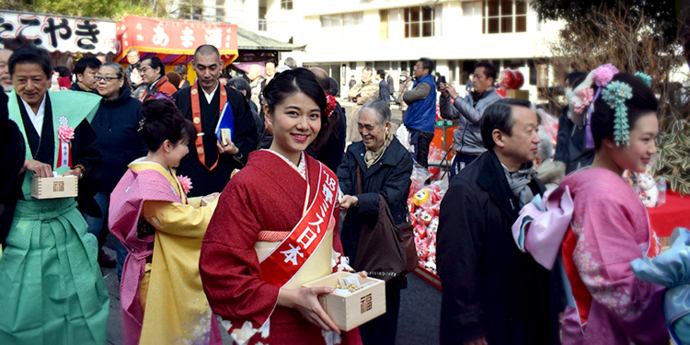 With preparations in place and everyone in the Setsubun mood, the big day itself opened with a parade through the festival stall-lined temple grounds on Saturday morning. Priests and well-known entertainers joined the toshi-otoko and toshi-onna in a procession to hand out beans to guests from special containers.

What are toshi-otoko and toshi-onna, you might ask? Put literally, they’re the men and women of the year – the zodiac year, that is! People born in the year of the current year’s zodiac animal play a central role in Setsubun’s bean-throwing. 2018 is the year of the dog, so if you’re a dog like me, it’s your year now!

After the precession passed, the crowd gathered in the open space near Takahata Fudo-son’s entrance. As you can see, it was packed! Everyone watched as this year’s bean throwers came out to the balcony overlooking the crowd. Special guests ranging from popular singers to Hello Kitty were joined by toshi-otoko and toshi-onna for the first of five bean-throwing ceremonies held throughout the day.

After some introductory remarks, the bean-throwing began. Throwers tossed handful after handful of beans, showering the crowd! People held up big paper bags to catch as many beans as possible. Traditionally, you only need to eat the number of beans equivalent to your age, but they’re so good that you’re going to want to round up generously.

Of course, the beans that didn’t get caught won’t be going to waste! People aren’t the only ones who benefit from the healthy snack. Crushed soybeans make a great fertilizer, so the beans smashed underfoot will help the temple’s hydrangeas grow for the Hydrangea Festival in June. Given that Setsubun marks a change of seasons, you couldn’t ask for a more perfect end to the day!