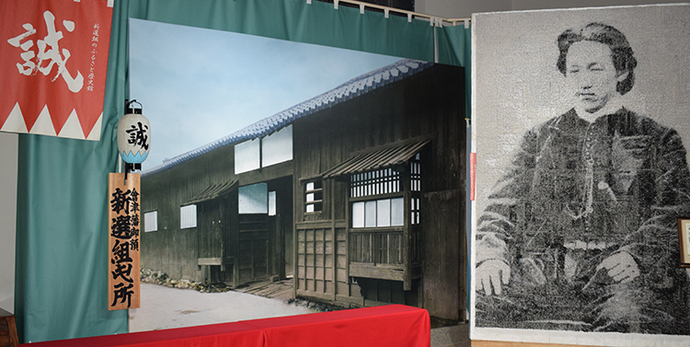 Perhaps you’ve heard of the Shinsengumi, the last group of samurai in Japan. The group was mainly active in Kyoto, but the Shinsengumi’s hometown, or furusato, is actually Hino! The vice-commander, Hijikata Toshizo, was born and raised here in the city, and many prominent members honed their swordsmanship with him at Hino’s dojo. That’s why one of the best places to trace the Shinsengumi’s humble beginnings to its turbulent end is Hino City’s Shinsengumi Furusato Historical Museum. The museum collects and displays resources related to the famous samurai group, such as a recreation of one of the commander’s most pivotal letters, wherein he resolved to stay in Kyoto and protect the shogunate to its – and his own – bitter end.

When you enter the museum, you’ll have the chance to dress up in a traditional Shinsengumi uniform. If you aren’t sure how to put the outfit on yourself, don’t hesitate to ask the staff at the front desk for help. Once they’ve got you geared up and looking like you just walked straight out of the Shinsengumi’s ranks, the museum staff can take your photo in front of a historic city backdrop with a replica katana. The sword I’m holding here is a model of Hijikata Toshizo’s favorite katana, Izuminokami Kanesada.

The exhibits on the first floor are dedicated to understanding the region and how the Shinsengumi formed, fought, and ultimately disbanded. Among the artifacts and important documents is a special exhibit where you can use a wooden training sword to practice Tennen Rishin Ryu sword techniques that Hijikata Toshizo and other Shinsengumi members once studied in Hino. The heavier sword of the two is weighted to handle just like a real metal katana. Despite Japanese swords’ sleek looks, they’re a lot heavier than you’d think! This exhibit will definitely hit home the incredible work ethic you’d need to become a samurai like the Shinsengumi members. 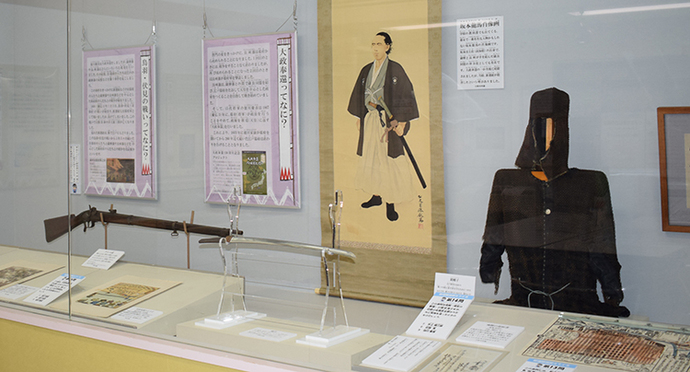 The museum also has a space for seasonal displays on the second floor. If you can make it in by September 3rd, the current exhibit is an interactive overview of the Shinsengumi geared towards elementary school kids who haven’t learned much about history yet. As an American, I don’t have the most background knowledge about Japanese history myself, so this exhibit was informational and interesting even as an adult. If you’re also new to the subject, this is a great place to dive in!
History buffs will definitely enjoy the upcoming Inoue Genzaburo exhibit, and if there are any anime fans or gamers reading this, they’ve also got an exhibit about the Shinsengumi in pop culture planned for next year where you can see how the past and present collide in works like Idea Factory’s hit series Hakuoki.

Overall, there’s something for everyone at the Shinsengumi Furusato Historical Museum, so it’s well worth an afternoon next time you’re around!

Museum exhibits and services are currently only available in Japanese. Visitors who are less confident in their Japanese ability will want to bring a Japanese-speaking friend to best enjoy everything the museum has to offer.