Do you know what a “honjin” is? During the Edo period, rest stop towns called “shukuba” were scattered along major roads to lodge travellers passing through the region. Apart from their suppliers and stables, these towns also featured special inns called “honjin.” Unlike ordinary inns, honjin were equipped to host high-ranking guests, such as feudal lords and Shogunate officials.

Back in the day, Hino functioned as a shukuba itself and was hence known as Hino-shuku. Its honjin, Hino-shuku Honjin, was owned and operated by the head of the town, a merchant named Sato Hikogoro. Among the many people to visit Sato’s honjin, one in particular stands out in history – his young brother-in-law.

Sato Hikogoro’s wife’s younger brother, Hijikata Toshizo, would one day become the vice commander of the Kyoto-based Shinsengumi samurai force, but he had his humble beginnings here in Hino. Sato studied the Tennen Rishin Ryu style of swordfighting, so he decided to open a dojo in his honjin, where Hijikata learned the way of the sword. Other future members of the Shinsengumi, such as Kondo Isami and Okita Soji, also honed their technique at the Hino-shuku Honjin.

Even after the Shinsengumi was established in Kyoto, Hijikata was said to have returned to the honjin en route to Edo. As legends have it, he even took catnaps in the honjin’s sunny entryway! 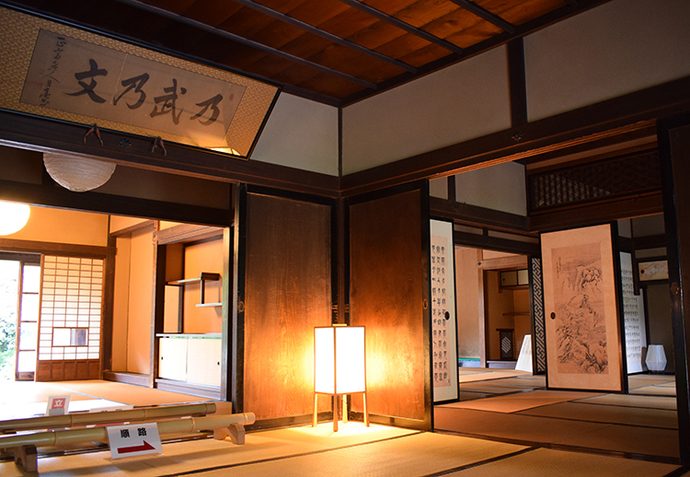 If you’re confident in your Japanese or know someone who can help you bridge the language barrier, I highly recommend taking a tour through Hino’s gorgeous honjin. The building was originally erected over 150 years ago, so it’s a great place to get a feel for Edo period architecture! The tour guides are friendly and knowledgeable, and can explain the honjin’s features right down to scratches on the floor.

One peculiar shape carved into the floor, for example, is thought to be a memento of the pond Sato Hikogoro had to fill in when he selflessly detached one of the honjin’s guest rooms and had it dragged out to replace the burned-down residence of a relative. Sato is said to have treasured the pond, and etched its shape into the floor near the cut away room to honor its memory.

There are countless other details about the Hino-shuku Honjin that you won’t be able to hear anywhere else! Take this decorative bat-shaped plate, which can be found hanging on a wall to hide a large nail. While bats often are associated with vampires and stealth in English media, they were seen as sleepless guardians who kept watch over the household by night in Edo period Japan. The beginning of the Japanese word for bat, komori, also happens to sound similar to a word for luck and fortune! If you look around, you’ll find intricate nail covers shaped like pairs of rabbits too. What do they mean? You’ll have to ask next time you visit!

Tours are currently only available in Japanese. Visitors who are less confident in their Japanese ability will want to bring a Japanese-speaking friend to best enjoy the Hino-shuku Honjin.