I’m sure many of you may be familiar with sakura flowers, one of the most widespread symbols of springtime Japan, but did you know that cosmos are often regarded as the sakura of autumn? Cosmos are also part of the same family as the chrysanthemum, the symbol of Japan’s Emperor and Imperial family (chrysanthemums are also Hino’s city flower). It’s little wonder then that these modest, hardy flowers are popular throughout the country, as well as right here in Hino!

This June, Hino residents from local associations, daycares, and other groups gathered for the start of the twentieth annual Cosmos Avenue Project. Participants worked in teams to plant patches of cosmos along the edge of Asakawa Sports Park bordering the sidewalk and road, hence the name “Cosmos Avenue.” Now, a few months later, this year’s cosmos are getting close to full bloom! They are expected to brighten up the road with white, pink, and purple blossoms throughout September until mid-October.

Maintaining a public garden like the Cosmos Avenue takes a lot more consideration and effort than you might think. This year, the avenue was divided into 35 plots, where participants planted one of two cosmos varieties strategically distributed based on stem length. This particular plot is full of short-stemmed flowers planted by the children at a local daycare.

After planting the seeds in June, participants in the project met up again in July and August to weed and prune together. They will be meeting again this month on the 30th. Some groups also take care of their plots individually between meetings!

Once the cosmos reach full bloom, they’ll look something like this! Aren’t they pretty? I’m sure it must be exciting for the Hino community to see all their hard work over these past few months pay off. I can’t wait to see how the avenue will look once all the flowers are open next month! 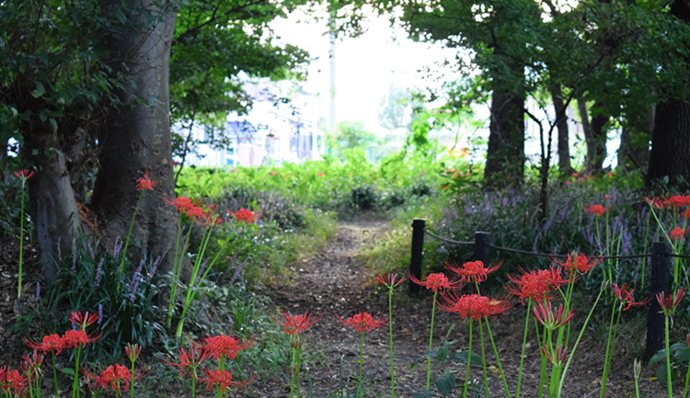 The Hino community really treasures the local environment, so there are plenty of opportunities to see seasonal flora year round. If you continue down past the end of the Cosmos Avenue, you can also see red spider lilies in the park just across the street, where they will be in bloom until the beginning of October. You can also check out the spider lily garden at Takahata Fudo-son. Next month, you’ll be able to catch the start of the Chrysanthemum Festival, followed by the Momiji Festival in November and the start of the strawberry growing season in December. I could (and totally should) fill a calendar with them all! It’s definitely nice knowing that no matter when you’re around, there will always be something to enjoy.

Weren't around for the Ayu Sweetfish Festival? We've got you covered! Check out the Hino Note on the festival to learn about another awesome environmental project in the area.