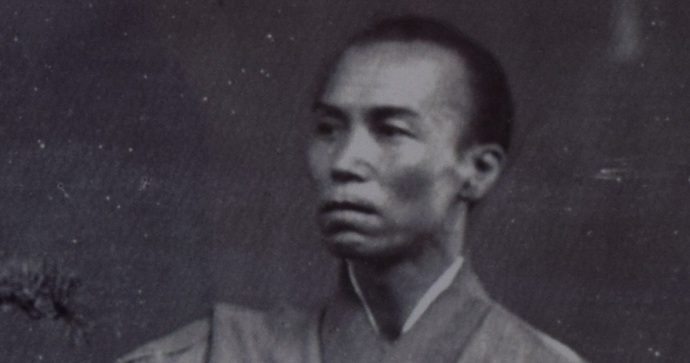 Though Hino may be the Shinsengumi's hometown, much of the group's career was based in Kyoto. Why is it, then, that so many resources and remnants of the famous samurai group have found their way here, halfway across Japan? The answer lies in a certain key figure who supported the Shinsengumi from behind the scenes since before the group was even formed – Sato Hikogoro.

As the owner of the Hino-shuku Honjin, Hikogoro ran the Hino area with his wife Nobu. Hikogoro studied the Tennen Rishin Ryu style of swordfighting, and decided to open a dojo in Hino. Nobu's younger brother, Hijikata Toshizo, trained at the Sato Dojo along with Kondo Isami, Okita Soji, Inoue Genzaburo, and Yamanami Keisuke.

When the Shogunate called for arms in the mid-1800s, Hikogoro wanted to go to help himself. However, he was unable to leave Hino unattended, so Hikogoro sent Toshizo to fight in his stead along with Kondo Isami and the others. Even after the group garnered fame in Kyoto as the newly formed "Shinsengumi," the samurai from the Sato Dojo sent letters and gifts back to Hikogoro and Nobu.
Now, around 150 years and five generations later, Sato Hikogoro's great great granddaughter Sato Fukuko runs the Sato Hikogoro and Shinsengumi Museum. As its name would suggest, the museum houses letters, weapons, and other items once owned and used by Hikogoro and the Shinsengumi.

As one of Hikogoro's own living relatives, Mrs. Sato has a deep interest in the history she teaches at the museum. Her passion made the experience that much more interesting, and the explanation had a personal feel you'd be hard-pressed to get online or in a textbook! This especially came through in the exhibits demonstrating the everyday, casual sides of Hikogoro and the Shinsengumi.

Hijikata Toshizo in particular had a very strong bond with Sato Hikogoro. After Toshizo lost his parents at a young age, Hikogoro took him under his wing and had him educated in the arts, such as swordplay and calligraphy. You can catch a glimpse of Toshizo's aesthetic sense in exhibits like this lovely tea set. During his stay in Kyoto, Toshizo sent these cups to his sister Nobu as a souvenir. You can also see Echizen Yasutsugu, a beautiful, high-class katana Toshizo had used personally until he heard Hikogoro's eldest son had been captured. Fearing that his nephew had lost his sword, Toshizo selflessly sent one of his own. Toshizo’s generosity both in good times and bad goes to show how important his family back home was to him.

Sato Hikogoro was more than just a family figure, however. He was also a major financial backer of the Shinsengumi. As such, it was important that he stayed up to date on the group's affairs. You can see a letter the commander of the Shinsengumi, Kondo Isami, wrote to Hikogoro in 1863 after dispatching of a spy. Isami explained that he liked using long wakisashis (a type of Japanese sword) because of their versatility in cramped alleys.

Aside from Kondo Isami, Hikogoro also received letters from other Shinsengumi members, such as Nagakura Shinpachi, Okita Soji, and —of course— Hijikata Toshizo.

Though Sato Hikogoro received updates on distant battles from back home in Hino, that's not to say he wasn't a skilled fighter himself! Hikogoro's dojo wasn't just for show; his sword bears clear signs of use. Moreover, his sword is quite lengthy and is heavier than can be wielded one-handed. Hikogoro's ability to handle such a large blade is a testament to his skill and strength.

Hikogoro also carried a metal fan with him. The heavy folding fan was not, however, for cooling himself, but for striking foes. You can also see guns, a spear, and other memorabilia, all at the Sato Hikogoro and Shinsengumi Museum!

While there is limited English signage, if you are not confident in your Japanese, you'll want to bring a friend who can interpret to best enjoy the museum.

To learn about the honjin and dojo Sato operated, check out the Hino Note on the Hino-shuku Honjin!