“He enters the room like a refreshing breeze.” Admiral Enomoto Takeaki once described the charismatic Hijikata Toshizo as a breath of fresh air that lifted the heavy atmosphere of strategy meetings. At the Hijikata Toshizo Museum, you can get a feel for why this legendary warrior was –and still is— so popular.

When you enter the museum, located in Toshizo’s childhood home, you first pass through the garden. There, you can see the arrow bamboo Toshizo planted himself, adorning the entryway with its practical, beautiful branches.

Passing through the doorway, you can see a model of the Hijikata property as it stood in Toshizo’s time. Though the building itself has been remodeled, the Hijikata family still lives here, using part of the residence to display materials related to Toshizo’s childhood and life as the vice commander of the Shinsengumi.

In the corner of the model, you can see a small house dedicated to the old Hijikata family business – the production and distribution of medicine.

Back in Toshizo’s time, the family had been selling a pain reliever called Ishida San-yaku medicine for generations. The medicine was used to treat sprains, bruises, and other such wounds. It came as a powder, which was typically mixed with sake to further relax the body. As a child, Toshizo helped sell his family’s Ishida San-yaku medicine, which was made and transported using the materials you see here.

In his youth, Toshizo also learned penmanship and the art of poetry. Like his arrow bamboo, Toshizo’s haiku verses were not only elegant, but also served an important purpose. Did you know that firstborn sons were prohibited from joining the Shinsengumi? This rule was put in place to prevent families from losing their heirs. As the sixth and youngest son of the Hijikata family, Toshizo left for Kyoto with the resolution that he might never return. To that end, he left a collection of 41 poems as a memento should anything happen to him. 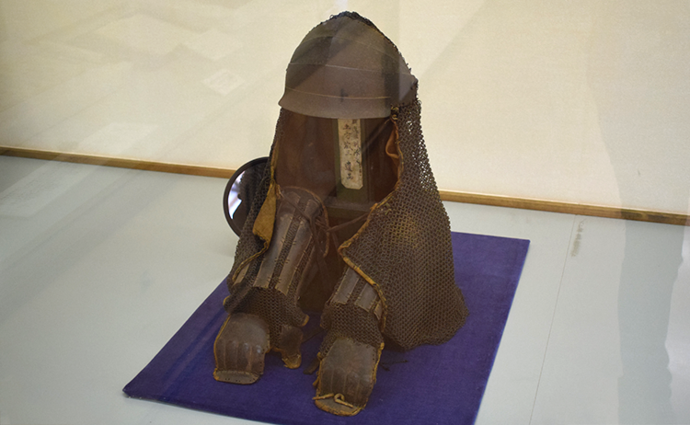 That’s not to say Toshizo would let anything happen! This set of chainmail, but one of the multiple sets of armor Toshizo owned, was what he wore during the bloody Ikedaya Incident.

The Shinsengumi operated like a special police force, so when they caught wind of a plot to burn the Imperial Palace and abduct the emperor, they immediately took action. After discovering that rebels were hiding in local inns, Kondo Isami and Toshizo each took search parties to locate and arrest the potential arsonists. Ultimately, they found and eliminated the rebels in a dramatic showdown at Ikedaya Inn on the night of Kyoto’s biggest festival, when the town was packed with sightseers from around Japan. As a result, news of the Shinsengumi’s overwhelming victory quickly spread through the country, making it clear to whole nation they were a force to be reckoned with. 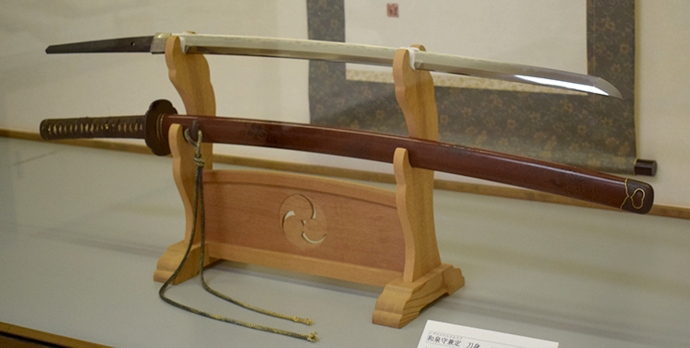 As they say, though, sometimes the best defense is a good offense. Of everything you see in the museum, one of the possessions Toshizo himself treasured most was Izuminokami Kanesada, his beloved sword. Even when Toshizo cut his long samurai hair shed his traditional Japanese clothes in favor of more practical modern gear, he always kept Izuminokami Kanesada with him despite having a holster for a gun.

After training with a heavy, 122 centimeter long wooden sword, Toshizo could wield this sleek 70.3 centimeter long uchigatana with ease, especially given that it wasn’t just any old sword. The blade was forged by a swordsmith belonging to the Aizu clan.

Nowadays, the sword has been designated as cultural property by the city and attracts fans of Hijikata Toshizo from around the world. If you get a chance to visit while Izuminokami Kanesada is on display, try asking how the sword made its way back to Hino. I promise you, it’s a touching story!

The Hijikata Toshizo Museum has explanations of the main displays in English. Please ask the curator for a copy if needed.