Are you enjoying the autumn scenery this November? Hino sure is! The city recently transformed the Tokyo streets of Takahata’s shopping district into a series of enchanting lantern-lit trails. Upon exiting Takahata Fudo Station, one of the first things I saw was this line of lanterns spelling out the name of this special annual event – the Takahata Momiji Illumination.

The 12th Takahata Momiji Illumination was held last week on November 22nd and 23rd. During the two day event, around 3,000 lanterns lined the streets with a warm, fall-colored glow. Especially with the gentle drizzle of rain, the lanterns’ reflections made me feel like I was walking on a path of light itself!

The elaborately carved lanterns along this road are a special type called yume-akari, or “dream lanterns.” As the name would suggest, the 450 or so lanterns featured as many different whimsical designs as you could possibly imagine, including everything from the Mad Hatter’s tea party to Takahata Fudo-son. 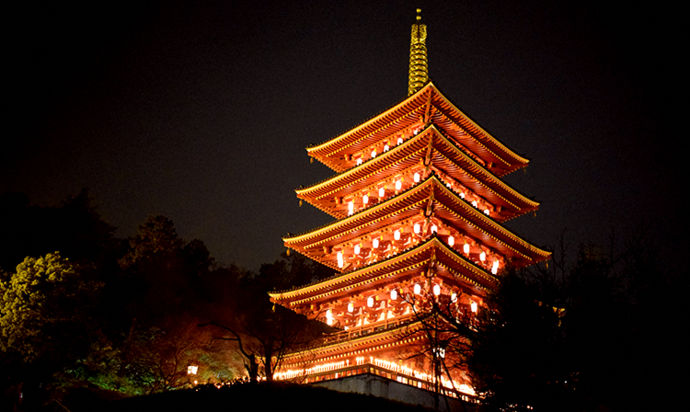 Speaking of Takahata Fudo-son and tea parties, the temple held casual Japanese-style tea ceremonies throughout the Takahata Momiji Illumination. The event coincides with the temple’s own Momiji Festival, so they went all out decorating the five-storied pagoda and blushing momiji trees in a sea of lanterns and candles. The way the light flickered was like watching leaves sway in the breeze, and definitely made for a magical sight.

What is momiji, anyways? As some of you may know, momiji (also sometimes referred to as Japanese maple) is a type of tree heavily symbolic of autumn in Japan. While you can see real, live momiji trees around Takahata Fudo-son, you don’t typically get the chance to enjoy them smack dab in the middle of a street, which is exactly where I took this photo!

This bridge prop and momiji branches were arranged in the road with a curtain of fallen leaves hiding the street pavement. It really felt like I’d been teleported straight into a Japanese garden.

The atmospheric Takahata Momiji Illumination also featured a number of events to enjoy, including live concerts, a photo shoot of a professional kimono-clad model, and local dining. Of course, you could also buy or decorate your very own lanterns as a souvenir of fleeting autumn nights. While winter may be fast approaching, the illumination was the perfect way to enjoy November to its fullest.