Inoue Genzaburo Museum and the 150th Anniversary of Genzaburo’s Death 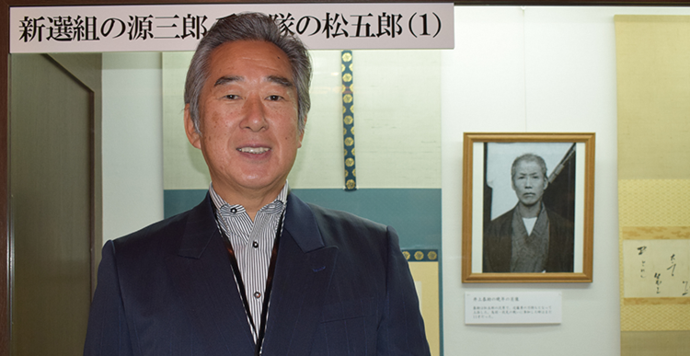 Inoue Masao also runs a private museum in Matsugoro’s former residence called the Inoue Genzaburo Museum, where he displays artifacts related to the samurai brothers’ lives. The two were born and raised in Hino, and studied swordfighting growing up.

Matsugoro joined a militia force called the Hachioji Sennin Doshin, a large band of farmer-samurai who served the shogun as policemen and firemen in times of need. Genzaburo, on the other hand, answered the call for arms in Kyoto with Hijikata Toshizo, Kondo Isami, and the other soon-to-be members of the Shinsengumi.

From a historical standpoint, Matsugoro had a very convenient hobby – writing! When he wasn’t practicing his swordplay, Matsugoro frequently wrote poems (haikai) and journal entries about events in his life. Thanks to this, the museum has written records of what Matsugoro and his acquaintances in the Shinsengumi – such as his brother and Kondo Isami – were doing.

The Inoue Genzaburo Museum also features the brothers’ physical possessions, such as the long blade portrayed above, Yamatonokami Minamoto no Hidekuni. Kondo Isami sent the sword to Matsugoro as a souvenir of Kyoto.

While Matsugoro passed away of illness at 48, Genzaburo lost his life after getting shot during Battle of Toba-Fushimi on January 5th, 1868. He was only 39 years old at the time. Now, almost a century and a half later, Hino is preparing for the 150th anniversary of Genzaburo’s death. The Shinsengumi Furusato Historical Museum has worked with Inoue Masao to put on a massive exhibit detailing Genzaburo’s life spanning both floors of the museum.

Like the Inoue Genzaburo Museum, the special anniversary exhibit is packed with documents and relics. For example, you can see Genzaburo’s name (源三郎) circled in red on this register from Hosenji, a local temple. At the time, temples drafted and maintained family registers. However, samurai were not included in these temple registers, which is why Genzaburo’s name has been marked. The circle is proof that he became a samurai!

The Inoue Genzaburo Museum is open year-round on the first and third Sundays of each month, but the anniversary exhibit at the Shinsengumi Furusato Historical Museum will only be around until February 18th. Don’t miss your chance to learn all about one of the pivotal members of the Shinsengumi!

The museum exhibits are presented in Japanese. If you aren’t confident in your Japanese, you’ll want to bring a friend who can interpret to best enjoy the museums.