About the 150th Anniversary of Hijikata Toshizo's Final Battle

2019 was the 150th anniversary of Hino-born Shinsengumi Vice-commander Hijikata Toshizo's passing. Hino remembered the local samurai hero with a variety of events and projects in 2019 to celebrate his life and accomplishments.

Who was Hijikata Toshizo?

Hijikata Toshizo is one of Japan's most famous and popular samurai. He was born and raised in Hino, where he learned sword-fighting with other notable historical figures such as Kondo Isami, Okita Soji, and Inoue Genzaburo. As an adult, he served as the Vice-commander of the Shinsengumi, a police-like force of samurai who protected the city of Kyoto during the final years of the Tokugawa Shogunate. He was also a key figure of the Boshin Civil War.

You can learn more about his life in the timeline linked below.

For the year of 2019, nine taxis decorated with Hijikata Toshizo's photograph serviced Hino and the greater Tokyo area.

Realizing that his next battle would likely be his last, Hijikata Toshizo is said to have sent his young page Ichimura Tetsunosuke to bring his photograph and other memorabilia from the frontlines in Hokkaido back home to his family in Hino.

With this anecdote in mind, Hino made Hijikata themed cardboard shipping boxes for Shinsengumi fans to use when sending packages to their own distant family and friends. 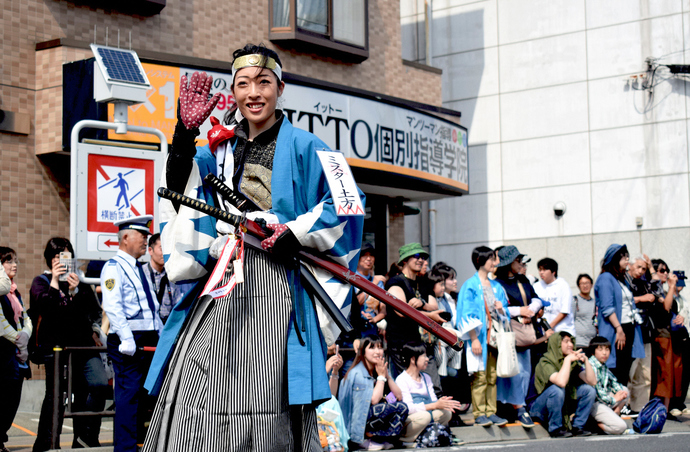 Every year, Hijikata Toshizo and other historical figures are brought to life by reenactors in the Hino Shinsengumi Festival's parade. To commemorate the 150th anniversary of Hijikata's final battle, Hino City produced a replica of his iconic sword, Izuminokami Kanesada, for the Hijikata Toshizo actor to wield in the parade.

Hino collaborated with Hakuoki, a dating simulation game featuring characters based on Shinsengumi swordsmen, to hold a stamp rally event and release limited edition merchandise. Details can be found in the pages below.